Bringing a spark of life to stories that have been forgotten or looking for creative re-invention. The company has a growing reputation for delivering inspiring and entertaining theatre in both conventional and non-theatre settings. 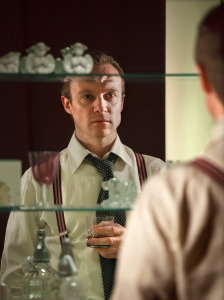 Most recently James received an OFFIE nomination for directing the World Premiere of Mike Bartlett’s first play Not Talking. He created The Hotel Plays by Tennessee Williams which premiered at the Grange Hotel, Holborn in 2012 and later moved to The Langham, London in 2014. Other productions include Sam Shepard’s A Lie of the Mind, Hard Feelings by Doug Lucie, The Armour by Ben Ellis and Insignificance by Terry Johnson in New York. For film, James has directed a number of shorts, winning awards at Tribeca Film Festival in New York, Cannes Film Festival and SXSW. He trained at RADA and has worked extensively as an actor in theatre, film and television. As a director James is represented by United Agents.

Annie has cast numerous Defibrillator productions, readings and workshops including The Hotel Plays, Not Talking and The Armour. Annie trained as an actress at the NYT and RADA. She then went on to become an independent Casting Director in 2009. Annie is a member of the CDG, RSA fellow, and BAFTA Crew alumni. www.annierowe-casting.com

As Executive producer for Defibrillator between 2013-2017 Trish produced A Lie of the Mind, Speech&Debate, The Hotel Plays, Hard Feelings, The One Day of the Year, The Armour and Insignificance. As an independent producer, The Red Lion (Trafalgar Studios) Burning Bridges (Theatre503) and as co-producer, My Night With Reg (Apollo Theatre). Trish is a Stage One Bursary recipient and director of The Uncertainty Principle.